Micronesian colonists reached the Marshall Islands using canoes circa 2nd millennium BC, with inter-island navigation made possible using traditional stick charts. They eventually settled here. Islands in the archipelago were first explored by Europeans in the 1520s, starting with Ferdinand Magellan, a Portuguese at the service of Spain, Juan Sebastián Elcano and Miguel de Saavedra. Spanish explorer Alonso de Salazar reported sighting an atoll in August 1526. Other expeditions by Spanish and English ships followed. The islands derive their name from British explorer John Marshall, who visited in 1788.
Spain claimed the islands in 1592, and the European powers recognized its sovereignty over the islands in 1874. They had been part of the Spanish East Indies formally since 1528. Later, Spain sold some of the islands to the German Empire in 1885, and they became part of German New Guinea that year, run by the trading companies doing business in the islands. 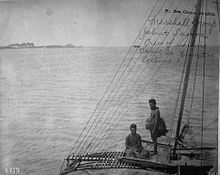 Micronesians settled the Marshall Islands in the 2nd millennium BC, but there are no historical or oral records of that period. Over time, the Marshall Island people learned to navigate over long ocean distances by canoe using traditional stick charts. [1]
The outbreak of World War II, as well as the passage of time, destroyed all remaining German buildings on the Marshall Islands. The sole surviving German-era wood building in all of Micronesia is the deBrum house on Likiep, built by Joachim deBrum in 1904–05. [10]

Tony deBrum, a Castle Bravo test witness and former Foreign Minister of the Marshall Islands, argued that the U.S. nuclear testing caused numerous health and infrastructure issues for the Marshallese. He commented that nuclear test victims “have been taken from us before their time,” so the U.S. could learn more about the “effects of such evil and unnecessary devices.”
A week after the Castle Bravo test, the U.S. launched a medical study on the effects of radiation on Marshallese, and provided medical care to the people who were exposed to high levels of radiation. Led by Eugene P. Cronkite, the effort was called Project 4.1. Today, scholars criticize Project 4.1 because researchers did not acquire informed consent from the Marshallese who participated. “The team conducting the study did not ask the Marshallese for their consent or even explain to them that a study was being conducted,” historian April Brown wrote in a 2014 article for Arms Control Today.

Under the constitution adopted in 1979, the government consists of a president elected by a unicameral, 33-member parliament known as the Nitijela. The Council of Iroij (Chiefs) has mainly a consultative function, concerned with traditional laws and customs.
American missionaries arrived in the Marshalls in the 1850s, introducing Christianity to the population. Today the Marshallese are predominantly Christian. The Marshallese and English languages are spoken, but only a minority are fluent in the latter.

2009 October – Jurelang Zedkaia is chosen as president after Litokwa Tomeing is ousted in a no-confidence vote.
circa 2000 BC – First Micronesian navigators arrive in the Marshall Islands, naming the atolls Aelon Kein Ad – “our islands”. They are skilled navigators able to make long canoe voyages among the atolls.