In the years before Vespucci embarked on his first voyage of exploration, he held a string of other jobs. When Vespucci was 24 years old, his father pressured him to go into business. Vespucci obliged. At first he undertook a variety of business endeavors in Florence. Later, he moved on to a banking business in Seville, Spain, where he formed a partnership with another man from Florence, named Gianetto Berardi. According to some accounts, from 1483 to 1492, Vespucci worked for the Medici family. During that time he is said to have learned that explorers were looking for a northwest passage through the Indies.
In May of 1499, sailing under the Spanish flag, Vespucci embarked on his next expedition, as a navigator under the command of Alonzo de Ojeda. Crossing the equator, they traveled to the coast of what is now Guyana, where it is believed that Vespucci left Ojeda and went on to explore the coast of Brazil. During this journey Vespucci is said to have discovered the Amazon River and Cape St. Augustine.

In the voyage of 1499–1500 Vespucci would seem to have left Ojeda after reaching the coast of what is now Guyana. Turning south, he is believed to have discovered the mouth of the Amazon River and to have gone as far as Cape St. Augustine (latitude about 6° S). On the way back he reached Trinidad, sighted the mouth of the Orinoco River, and then made for Haiti. Vespucci thought he had sailed along the coast of the extreme easterly peninsula of Asia, where Ptolemy, the geographer, believed the market of Cattigara to be; so he looked for the tip of this peninsula, calling it Cape Cattigara. He supposed that the ships, once past this point, emerged into the seas of southern Asia. As soon as he was back in Spain, he equipped a fresh expedition with the aim of reaching the Indian Ocean, the Gulf of the Ganges (modern Bay of Bengal), and the island of Taprobane or Ceylon (now Sri Lanka). But the Spanish government did not welcome his proposals, and at the end of 1500 Vespucci went into the service of Portugal.
Did you know? Thefirst use of the name “America” was in 1507, when a new world map was created based on the explorations of Amerigo Vespucci.

1492-93 Isabella I, Queen of Castile, wanted to claim the Spice Islands for Spain. She sent Christopher Columbus, an explorer and navigator, to find the fabled islands across the Atlantic Ocean. Columbus came ashore in the Bahamas with three ships, the Ninia, Pinta, and Santa Maria in October of 1492. Columbus claimed the lands for Spain and made the first European discovery of the Americas. 1494 The Catholic monarchs of Castile and Aragon and King John II of Portugal signed the Treaty of Tordisillas in 1494. The signed agreement divided the new world between the two navigational super powers. Thus set the legal base for the colonization of Brazil by the Portuguese. Spain was awarded all other lands lying 370 leagues west of the Cape Verde Islands. Neither country had fully explored the territory they were dividing. 1496 Santo Domingo becomes the oldest permanent city of the New World. 1499-00 Amerigo Vespucci was onboard several voyages that explored the east coast of South America between 1499 and 1502. Vespucci was part of Pedro Alvares Cabral’s expedition that discovered the coast of Brazil in 1500. Portugal claimed this land in the Treaty of Tordesillas, signed in 1494. By 1502 two of Vespucci’s accounts were published, revealing new facts about the New World to the rest of Europe. 1513 Juan Ponce de Leon (Spain) discovers the coast of Florida from Mosquito Inlet to Charlotte Harbour. He left Puerto Rico on March 4 and arrived on the Florida coast on April 2, 1513 with three ships, the Santiago, the San Cristobal, and the Santa Maria de la Consolacion. He named his discovery La Florida, in honor of the Easter Season and Spanish festival of flowers (Pascua Florida).
Vasco Nunez Balboa crossed the mountainous Isthmus of Panama and was the first Spaniard to lay eyes upon the Pacific Ocean, which he recorded as the South Sea. His discovery, made on September 25, 1513, claimed the regions riches of gold and pearls for Spain. Balboa returned to Spain in 1518. The King, convinced by his advisors that Balboa was stealing, ordered Balboa beheaded for treason in January 1519. 1519-22 King Charles I of Spain contracted Ferdinand Magellan to find a westward route to the Spice Islands for Spain. Magellan’s expedition left in 1519 and was the first to cross from the Atlantic to the Pacific Ocean. Magellan did not complete the entire journey; he was killed in the Philippines. Juan Sebastian Elcano led the rest of the expedition, arriving back in Spain by 1522. Only 18 of the original 237 men completed the entire voyage. 1519-23 Hernando Cortes was a Spanish conquistador who claimed Mexico for Spain and was responsible for the fall of the Aztec Empire. He was given the title, Marques del Valle de Oaxaca, though denied a prestigious position in the New World by the King of Spain. He returned to Spain in 1541 where he died. His heirs retained his title and estate in Mexico until 1811. 1521 Ponce de Leon returned to Florida in 1521. He planned on establishing a colony, between the Caloosahatchee River and Charlotte Harbor on the west coast of Florida. He took two ships and 200 colonists. The Calusa Tribe attacked the settlers as soon as they came ashore and a poisoned arrow hit Ponce de Leon in the leg. The colonists returned to Havana in July 1521, where Ponce de Leon died of his wounds. 1523 Frenchman Jean Fleury waylays a treasure fleet of Cortez on its way to Spain and captures two ships. 1525-27 Francisco Pizarro’s (Spain) expedition to the Inca Empire in Peru. 1526 Lucas Vazquez de Ayllon established the first named Spanish settlement in North America, San Miguel de Guadalupe on October 8, 1526. Ayllon’s party consisted of 600 settlers and around 100 horses. Sickness, Indian attacks, and low supplies plagued the settlers and Allyon died along with many others. 150 survivors returned to Hispaniola in 1527, abandoning the first Spanish settlement forever. The exact site of San Miguel has not yet been discovered by modern scholars. 1527 Panfilo de Narvaez, Spanish Conquistador, led a failed expedition to Florida in 1527. Narvaez’s expedition landed at Tampa Bay with 500 men in April 1528. Most of the expedition died, including Narvaez, due to Indian attacks, starvation, and sickness. Only 4 members of the original party returned to Spanish colonies in Mexico. Cabeza de Vaca, a junior officer of the expedition recalls the 8-year journey in his account, Naufragios (Castaways). 1535 Francisco Pizarro, Spanish Conquistador, conquered the great Incan Empire in Peru. Pizarro founded the city of Lima, on January 6, 1535. Mines were established throughout the region, obtaining an unprecedented amount of wealth for the Spanish crown. Flotillas (large ships) brought the riches back to Spain along the Florida coast. The return route was dangerous, and the Spanish established St. Augustine in 1565 as an outpost for the treasure fleets. 1537 Jean de Ango of Dieppe (France) captures nine galleons of the treasure fleet returning from Peru. 1539-43 Hernando de Soto led an expedition to Florida in May 1539. He took 9 ships, 620 men and 220 horses. He landed at a place called Espiritu Santo, near present-day Tampa Bay and traveled throughout the American Southeast. He was the first European to officially document the Mississippi River. De Soto died of a fever on May 21, 1542, unable to complete the journey. About half of the men died during the expedition, only 300 returned to Mexico City four years later. 1554 Phillip II, King of Spain, appointed Pedro Menendez de Aviles captain-general of the Treasure Fleet between Spain and America in 1554. The governors of commerce in the Caribbean objected the Menendez’s appointment because of his close ties to the crown and refusal to be bribed. Menendez’s remained in charge of transporting Spain’s riches from the Americas until 1563. 1559-61 Tristan de Luna y Arllano established a Spanish settlement in modern-day Pensacola, Florida in 1559. The settlement was established to provide an overland route of trade between Santa Elena and the Gulf of Mexico. A hurricane hit the settlement on September 19, 1559 destroying most of the vessels and supplies. The settlement survived for only a few years and was abandoned by 1561. 1561 Angel de Villafane (Spain) attempts unsuccessfully to relocate the Pensacola settlers on Santa Elena (Parris Island). 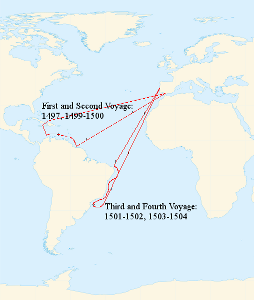 Flint has tutored mathematics through precalculus, science, and English and has taught college history. He has a Ph.D. from the University of Glasgow
In 1499, King Manuel of Portugal invited Amerigo Vespucci to sail to the Americas as an observer. He went on at least two trips (1499-1500 and 1501-1502) and maybe four (1497 and 1503-4). The fifteenth century voyage(s) were mainly to the West Indies. He landed first in Venezuela before heading up the coast, sailing between Cuba and Haiti and landing in Haiti, and heading home. His sixteenth century trips brought him to Brazil, where he followed the coast to the modern boundary before going home.